Flying to New York with my friend Murphy

Murphy of “Murphy’s Law,” that is.  In the wake of TS Sandy’s devastation, it looks like VOX 2012 will rearrange some scheduling and carry on as planned.  Meaning that I’ll be flying to New York on Sunday.

What’s VOX?  It’s basically a contest sponsored by New York City Opera.  This year, six new operas were chosen for excerpted performance on November 8th at the Skirball Center (lower Manhattan, Washington Square area).  An opera written by Christopher Weiss and me — In a Mirror, Darkly — is one of the six.  The excerpts from our opera are taken from Act I “The Lady of Shalott” and Act III “That Dame.”

This image of the famous Pre-Raphaelite painting entitled The Lady of Shalott gives you an idea of the visual style of Act I:

And this film-frame from the film noir classic The Big Combo gives you an idea of the visual style of Act III: 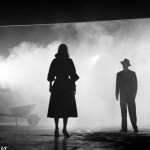 When we get to New York I’ll try to convince Murphy that he needs to take a hike!